An introductory guide of the platen control panel of TexJet shortee2 printer. Get to know all the buttons’ functions and their alternative options. 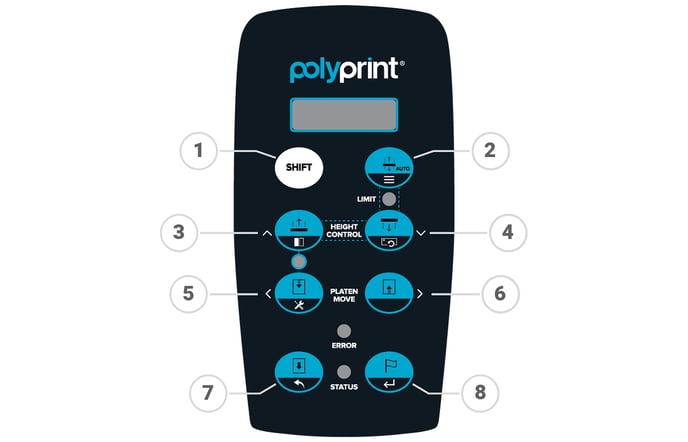 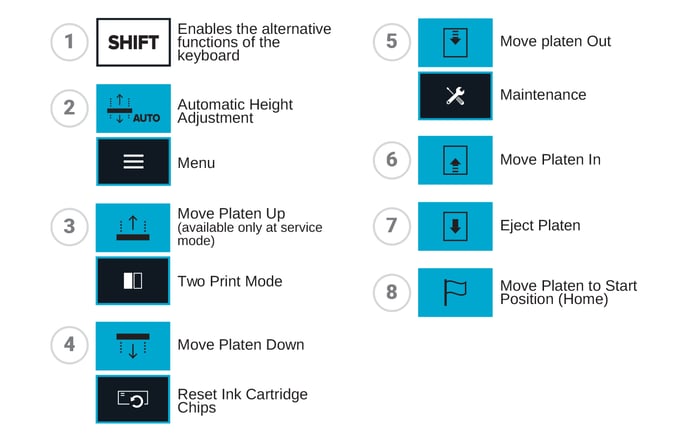 It pulls out the platen all the way out. It also works as a Cancel button, in case you regret sending the table in. By pushing it one time the platen stops.

It moves the platen to the start position, back inside the printer, where the printing procedure can take place. The panel’s screen reads READY TO PRINT. This button has the same function as the white LED button.

It pulls out the platen only at the point you want to. Press it continuously until it reaches the desired spot and then release it.

It moves the platen back inside the printer, where the printing procedure can take place. It works similar with the out button. It pushes in the platen only at the point you want to. Press it continuously until it reaches the desired spot and then release it.

Note: The In button can not move the platen up to printing position. To send the platen there, press either the Start Position button or the Blue button.

Works only in Service Mode.

Down button. It moves the platen down, meaning increasing the platen’s distance from the printhead. Useful when you want to avoid contact with the printhead’s bottom (e.g. thicker garments).

Auto height adjustment feature on TexJet shortee2 & why it is important

Enables the alternative functions of the keyboard.

It moves the platen to the start position, back inside the printer, where the printing procedure can take place. The panel’s screen reads READY TO PRINT. This button has the same function as the Start Position or Home button.

Tip: Pressing the Eject button immediately after executing any Main button function, will cancel that function.

To enable the alternate button functions you need to first press the Shift button and then whichever button you want to use according to the list below.

Gives you entrance to the Menu, where you can navigate using the panel’s button as in the case of a keyboard.

Pressing the Up Button alone you select the above option.

Pressing the Down Button alone you select the below option.

Pressing the Out Button alone you select the left option.

Pressing the In Button alone you select the right option.

Pressing the Eject Button alone works like the common "Back" button, transferring you to the previous page.

Enables the two print mode feature. This way the platen moves back inside, on its own, after the first printing job and begins the second. Useful, in case of dark garments. Its helpful when you print the white underbase first and afterwards the CMYK layer. A time saving move that alerts you that is in operation with the LED below the Up button. To turn this feature off, press Shift + Up again.

Gives you access into maintenance routine. The panel’s screen reads PLEASE PERFORM A HEAD CLEANING OR EJECT TO ABORT. If you want to proceed on running maintenance, follow the instructions or if you want to abort push the Eject button.

When an error occurs in the printer or when the environmental conditions are not suitable then this LED turns on and makes noise.

Below the Auto button there is a LED that turns red when the platen reaches a distance that is considered unsafe for printing (too close to the printhead). To turn it off, push the Down button until the right height is achieved.

When it is on indicates that the two printer mode is on operation. To turn it off, push the Shift and after the Up button.