Mechanical, electronical and manufacturing differences between the two TexJet models. 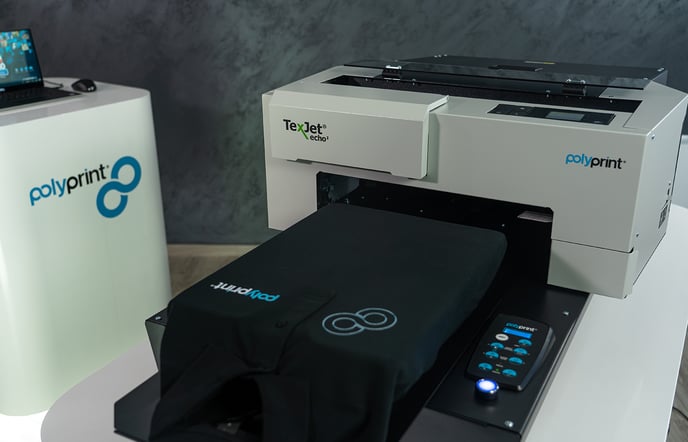 The TexJet echo2 printer is the successor of TexJet echo, meaning that its design was based on TexJet echo and further improvements were made to upgrade its performance. Both printers are part of Polyprint TexJet series. Between the two models there are some important manufacturing differences that made echo2 one of the most innovative and robust printers in the market.

One of the most important advantages of echo2 that distinguish it from echo, is the new linear motion system (y axis). The system is now controlled by a synchronous motor that increases the stability of the platen movement, resulting in exceptional quality and precision. This solid construction requires minimal maintenance even after thousands of prints.

The printhead gap was adjusted from 1.8mm to 2.5mm. This increased gap prevents fibers from the garment from coming into contact with the printhead’s bottom, where the nozzles are located, minimizing ink flow issues and prolonging the printheads’ lifespan. Precise and sharp printing is now feasible, even to uneven surfaces, such as shoes, or low quality textiles.

Note: This upgrade is also available for the TexJet echo units. If you want to apply this feature to your printer fill the form: https://polyprintdtg.com/support/

This button was added in order to protect, both the printer and the user, from a misfunction. By pressing it, the platen stops and the printer shuts down, halting production immediately. Very useful in case you want to abort a job, as soon as possible. 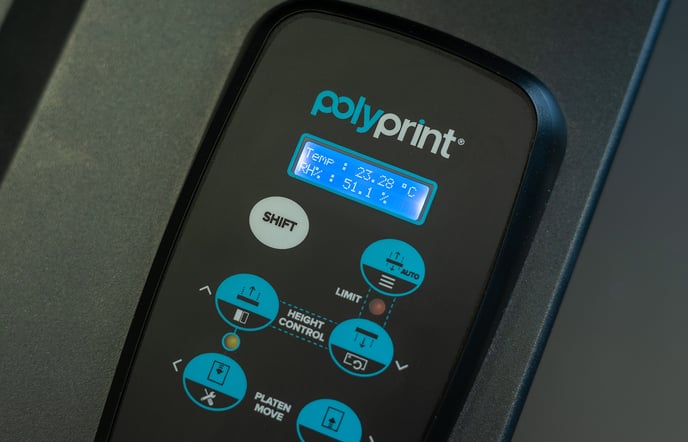 Special sensors were integrated to the printer to monitor ambient environmental conditions of the workspace and alert you for changes that may affect your results. The humidity levels and the temperature are always displayed in the Platen Control Panel during the printer's initialization. You will also see them in pop-up messages, when the sensors detect an unwanted change, out of the recommended values.

Importance of humidity & temperature conditions on my workspace

The Platen Control Panel is equipped with a new upgraded interface that allows the display of pop-up guiding messages that helps you operate the printer in an easier way. Warning messages, maintenance steps, and inappropriate environmental conditions are displayed to inform the user at any stage of the production

The new electronic board provides detailed information regarding the printer's status, such as total and daily print count that are archived. In addition, it records data logs, such as fatal errors, environmental conditions, maintenance routines and other, so it gives the ability for remote diagnosis from our support team.

TexJet echo2 platen motion system was designed as a closed unit. This means that the system parts stay protected from exposure to fibers, dust and excess fabric that can be caught up and cause issues to the printer – prolonging its lifespan. This is the reason the printer has a 3 years limited warranty!

Another helpful feature was the increased space beneath the platen, in order for the user to have more space to tuck in thicker or larger garments. Now printing on hoodies or home textiles just became much more convenient and user-friendly.

How to print on hoodies with TexJet printers